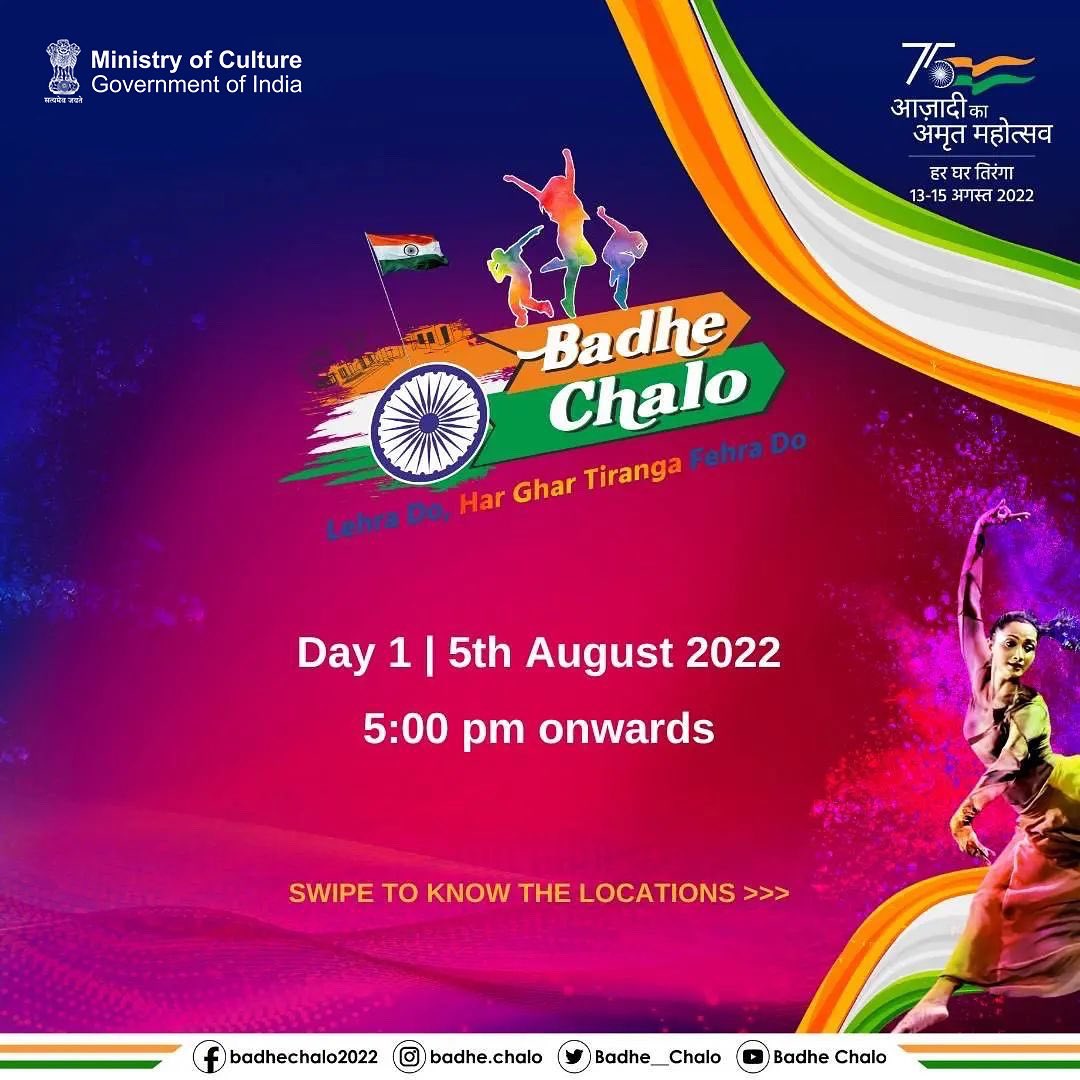 ‘Badhe Chalo’ Movement under Azadi ka Amrit Mahotsav has begun from 5th August. With an objective to instill a deeper sense of patriotism among the youth, the Ministry of Culture, has decided to create a youth centric activation for greater outreach of Amrit Mahotsav named ‘Badhe Chalo’.

It is being held across 10 cities every day from 5th to the 11th August. ‘Badhe Chalo’ have begun at national level and these ten locations include Lal Chowk in Srinagar, Ashtley Hall in Dehra Dun, Akashdeep Market in Itanagar, Central Mall in Patna, Telibandha Talab in Raipur, CMR Mall in Vishakhapatnam, Gaurav Tower in Jaipur, the Maharaja Sayajirao University of Baroda, Alpha One Mall in Ahmedabad and Keshav Vatika in Kanpur.

To connect and to bring the youth and people of the country at one platform, Badhe Chalo movement will feature Flash Dances across 75 cities, where dancers will perform on a specially created ‘Youth Anthem’. Through these Flash Dances the Ministry of Culture aims at spreading the message and spirit of the Amrit Mahotsav in an entertaining and enthusiastic manner. The energetic foot-tapping anthem has been specially written and composed on the theme of ‘Badhe Chalo’ and it encourages everyone to come forward and hoist a Tiranga in their homes.

These events will culminate with a Grand Finale on the 12th of August, at Talkatora Stadium in New Delhi. This spectacular star-studded event will feature performances by the Indian Idol stars Pawandeep Rajan and Arunita Kanjilal.

‘Azadi Ka Amrit Mahotsav’ is an initiative of the Government to celebrate and commemorate 75 years of progressive India and the glorious history of its people, culture and achievements.

Through this mass movement or ‘Jan Bhagidari’ initiative, the Ministry of Culture also intends to amplify and support the ‘Har Ghar Tiranga which calls upon every Indian to hoist a Tiranga in their homes between the 13th to 15th of August.