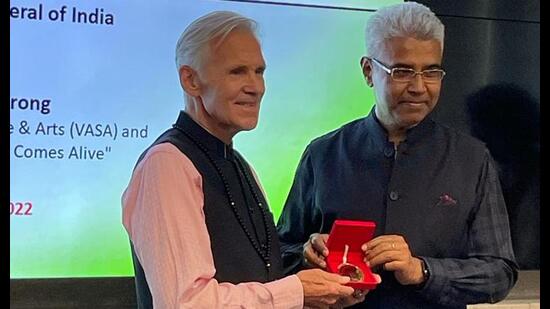 A Canadian scholar has been awarded the Indian Council for Cultural Relations (ICCR) Distinguished Indologist for 2021.

Jeffrey Armstrong was presented the award in a ceremony on Tuesday evening by Manish, India’s consul-general in Vancouver.

The citation for the award states that it has been conferred upon Armstrong “in recognition of his outstanding contribution to the study/teaching/research in India’s philosophy, thought, history, art, culture, Indian languages, literature, civilisation, society, etc”.

The consulate-general of India in Vancouver had nominated Armstrong, founder of the Vedic Academy of Science & Arts and author of The Bhagavad Gita comes Alive.

The annual award was instituted in 2015 during the First World Indology Conference hosted by the then President of India bringing prominent Indologists from world over to a single platform with Indian scholars to deliberate upon the scope of promoting Indian studies abroad. The award is conferred upon a foreign scholar for “their outstanding contribution in study, teaching and research in any of the fields of Indian Studies.

The first recipient of the award in 2015 was Professor Heinrich Freiherr Von Stietencron from Germany.

The award comprises a citation, a gold-plated medallion, and US$ 20,000 (approximately ₹1.6 million).