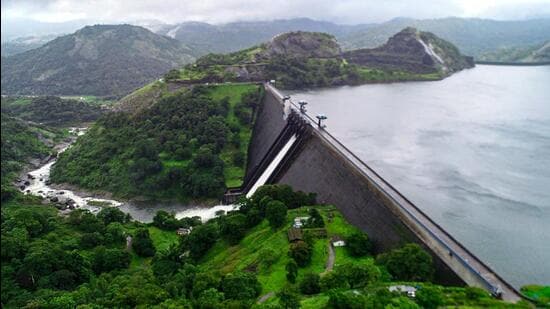 Recently, One shutter of the Cheruthoni dam of Idukki reservoir in Kerala was raised by 70 centimetres to discharge excess water from the dam after the water level reached 2384.10 feet in the morning.

State water resources minister Roshy Augustine said by raising one shutter, 50 cumecs of water will be discharged from the dam while adding that there was no need for people living downstream to worry about the release.

The Idukki reservoir consists of two dams, the Arch dam and the Cheruthoni dam, and the shutters of Cheruthoni dam were opened for the first time in 26 years in 2018, to mitigate the worst flood faced by the state in a century. This is the eight time the shutter has been raised now.

The Cheruthoni Dam, located in Idukki District, Kerala, India, is a 138m tall concrete gravity dam. This dam was constructed in 1976 as part of the Idukki Hydroelectric Project along with two other dams Idukki and Kulamavu. The Government of Canada aided the Project with long-term loans and grants.

The water impounded by three dams of Idukki, Cheruthoni & Kulamavu has formed a single reservoir spread over 60 km2 on a height of 2300 ft above Mean Sea Level.