Ropeways have emerged as  convenient and safe mode of transportation in hilly areas as the rail and air transport networks are limited in these areas, while the development of road network has been a technical challenge. 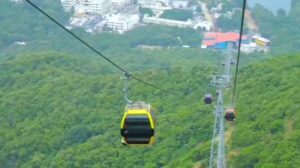 Due to this, the government has decided to develop Ropeways in hilly areas of the country. The Ministry of Road Transport and Highways (MORTH) has so far been responsible for development of Highways and regulating the road transport sector across the country.

The move will give a boost to the sector by setting up a regulatory regime. The Ministry will also have responsibility for development of ropeway and alternative mobility solutions technology, as well as construction, research, and policy in this area. Formulation of institutional, financial, and regulatory framework for the technology will also fall under the ambit of this allocation.

Union Finance Minister Nirmala Sitharaman, while presenting Union Budget for 2022-23 announced National Ropeways Development Programme – “Parvatmala” — will be taken up on PPP (Public Private Partnership) mode, which will be a preferred ecologically sustainable alternative in place of conventional roads in difficult hilly areas.

The idea is to improve connectivity and convenience for commuters, besides promoting tourism. This may also cover congested urban areas, where conventional mass transit system is not feasible.

The Finance Minister announced that contracts for 8 ropeway projects for a length of 60 km would be awarded in 2022-23. The scheme is being presently started in regions like Uttarakhand, Himachal Pradesh, Manipur, Jammu & Kashmir and the other North Eastern states.