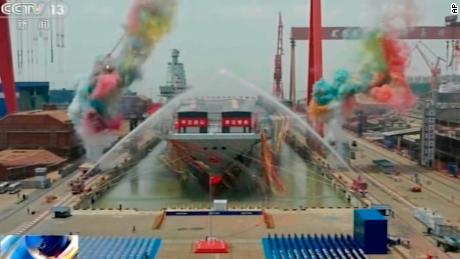 China launched its third aircraft carrier named ‘Fujian’, the country’s most advanced as well as the first “fully domestically built” naval vessel, as an aggressive Beijing sought to project its naval power in the strategic Indo-Pacific region.

The launching ceremony of ship ‘Fujian’ was held at the Shanghai’s Jiangnan Shipyard. Fujian is the name of China’s eastern coastal province of Fujian.

The launch of the ship was delayed by two months due to the COVID lockdown of Shanghai. It was due to be launched on April 23 around the 73rd anniversary of the People’s Liberation Army Navy (PLAN). China’s first aircraft carrier, the ‘Liaoning’, was a refit of the Soviet-era ship commissioned in 2012 followed by the indigenously built 2nd aircraft carrier ‘Shandong’ in 2019.

Liaoning and Shandong are names of two provinces of China. China plans to have around five aircraft carriers, according to the official media.

The next aircraft carrier China plans to build is expected to be nuclear-powered. State media reported that the Type 003 warship with a hull number of 18, is the first carrier in China’s fleet to use an electromagnetic catapult to launch planes from the deck, which is faster than the older steam catapult system.

China’s naval buildup comes amid growing geopolitical tensions with the US, which under President Joe Biden is seeking to strengthen ties with allies and partners in the Asia-Pacific region to counter Beijing’s growing economic influence and military might. Fujian, in the southeast, is the closest province to Taiwan, a self-ruling province that China says must be reunified with the mainland, even by force.

China’s first aircraft carrier, the Liaoning, is so far the only Chinese aircraft carrier with the initial operational capability or the basic level of combat readiness.