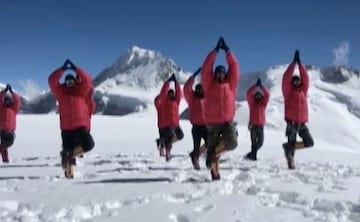 The Indo-Tibetan Border Police (ITBP) has created its first mountain-warfare training centre in northeast India, its second overall, to skill its troops in high-altitude combat and survival tactics as part of their mandate to guard the Line of Actual Control with China.

The facility has come almost after five decades of the establishment of its first such school called mountaineering and skiing institute (M&SI) during 1973-74 at Auli near Joshimath.

The M&SI is located at a height of more than 9,000 ft in the Himalayan ranges of Uttarakhand and has trained thousands of ITBP, army, Air Force and other security personnel in this domain and that for adventure sports.

The new centre has been established in remote Dombang, abutting the LAC, and is located at a height of 10,040 ft in Sikkim that shares a 220 km front of the India-China LAC.

The training centre at Sikkim was conceptualised in order to enhance the capacity to train newly recruited and serving troops in mountain-warfare, rock climbing, high-altitude survival and patrol even as the need to have one more facility than Auli was being felt for long, given the increasing engagement of its troops with the Chinese PLA over the last few years.

The new training centre is vital for the force given the current backdrop of military standoff with China and frequent confrontation with Chinese personnel owing to the border dispute.” “It (Sikkim centre) was inaugurated by ITBP director general Sanjay Arora last year in September and the feedback has been good as two batches comprising 80 trainees have already passed out from there.

The centre is being commanded by ITBP Commandant and ace mountaineer Ratan Singh Sonal, who has led numerous expeditions and rescue missions in the hills.

The Dombang centre has an ideal mountainous and rocky terrain and its glacier training area spreads across a height of 14,000-17,000 feet, he said.

The facility, at present, has a categorisation of being an “ad-hoc” centre but, as per officials, it is soon expected that the ministry of home affairs (MHA) will sanction it formally so that more equipments, manpower and facilities can be added.

Mountain, winter and high-altitude battle craft has been aptly described in a blueprint prepared by the force after it was tasked to guard the 3,488 kms LAC post the India-China war of 1962.